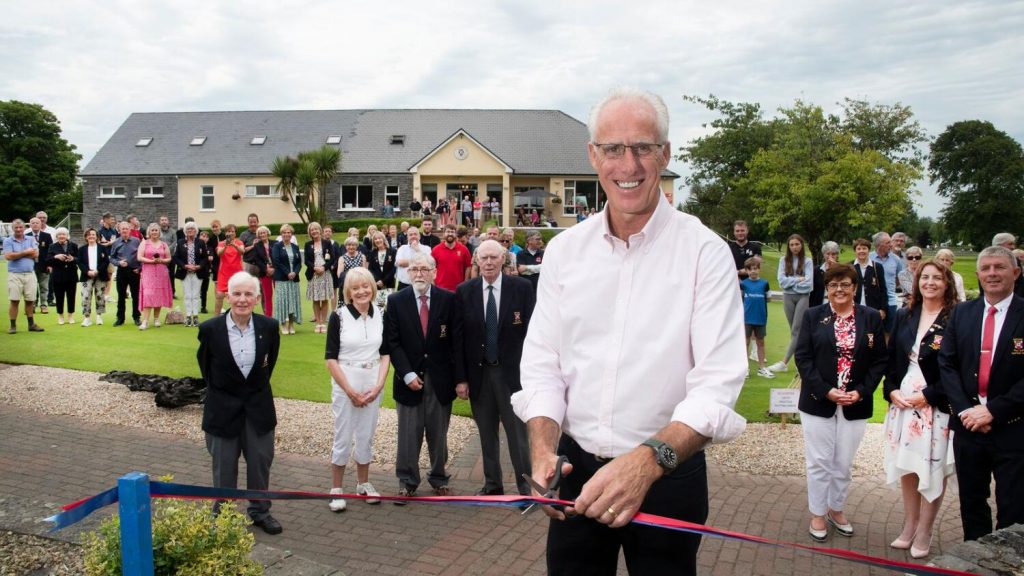 The club undertook the project after a compulsory purchase order was placed on 2.08 acres of its course in 2013 by Mayo County Council to make way for the new €200 million roadway between Turlough and Westport.

After reaching an agreement with the council, the club purchased over 30 acres of adjoining lands on which a series of new holes were created to replace the ones being lost as a result of the new road structure.

The redesign was led by Ryan Hanley Limited as project manager with Jeff Howes as course designer working alongside Trevor Norris, turfgrass agronomist. The main contractors were Dar Golf.

A chronology of events leading to the course reconfiguration – from 2008 when the club’s lands was first identified as being part of the new road’s preferred route to 2021 when the project was fully completed – was outlined by Joe Beirne, former Mayo county engineer who served as captain of Castlebar Golf Club in 2015. He was also joint project co-ordinator along with Noel Burke.

He thanked all the men’s captains, lady captains, officers and members who served on the club’s roads committee and helped to bring the project to fruition over many years.

Mr. Beirne paid a special tribute to the late Pauline O’Donoghue, former lady captain, for her support during the project.

He also thanked the late Harry Jennings and his family and the late Rory O’Connor, solicitor, for their input to the success of the redevelopment.

In his address, Mick McCarthy said he played the course on a number of occasions over the weekend and found it both an enjoyable and challenging experience.

He stated he could not recommend it highly enough to lovers of the sport.

Thanking the club for the invitation, he said when he received the call from club official Shane Quigley he immediately accepted it due to his friendship with Shane’s father Pat, a former president of the Football Association of Ireland.

“I have been made very welcome during my time in Castlebar and I wish the club every success in the future,” he added.

Ian Brennan, men’s captain, said the club had come through a very difficult period in its history but was now in a very healthy position in terms of having one of the finest parkland courses in the country.

He thanked everybody who played a role during the course redevelopment programme.

Maureen Collins, lady captain, said it was a landmark occasion for Castlebar Golf Club, first founded in 1910 as a nine-hole course before becoming an 18-hole course in 1985.

She thanked the staff, members and sponsors for their ongoing support and loyalty to the club.

“We can look forward to a bright and healthy future,” she added.

Former captains Joan Langan and Mick Kilcourse played drives off the first tee-box to bring the opening ceremonies to a fitting close.

We use cookies on our website to give you the most relevant experience by remembering your preferences and repeat visits. By clicking “Accept All”, you consent to the use of ALL the cookies. However, you may visit "Cookie Settings" to provide a controlled consent.
Cookie SettingsAccept All
Manage consent

This website uses cookies to improve your experience while you navigate through the website. Out of these, the cookies that are categorized as necessary are stored on your browser as they are essential for the working of basic functionalities of the website. We also use third-party cookies that help us analyze and understand how you use this website. These cookies will be stored in your browser only with your consent. You also have the option to opt-out of these cookies. But opting out of some of these cookies may affect your browsing experience.
Necessary Always Enabled
Necessary cookies are absolutely essential for the website to function properly. These cookies ensure basic functionalities and security features of the website, anonymously.
Functional
Functional cookies help to perform certain functionalities like sharing the content of the website on social media platforms, collect feedbacks, and other third-party features.
Performance
Performance cookies are used to understand and analyze the key performance indexes of the website which helps in delivering a better user experience for the visitors.
Analytics
Analytical cookies are used to understand how visitors interact with the website. These cookies help provide information on metrics the number of visitors, bounce rate, traffic source, etc.
Advertisement
Advertisement cookies are used to provide visitors with relevant ads and marketing campaigns. These cookies track visitors across websites and collect information to provide customized ads.
Others
Other uncategorized cookies are those that are being analyzed and have not been classified into a category as yet.
SAVE & ACCEPT